Should We Invest in Cryptocurrency? A 2020 Analysis

Wondering if whether investing in Cryptocurrency like bitcoin and there is a wise asset group to invest your money in; this article is for you.

There’s a certain amount of mystery that why should we invest in Cryptocurrency. Satoshi Nakamoto is the pseudonym used by the presumed person or people who developed bitcoin cryptocurrency, created bitcoin’s original implementation software, and originate the first blockchain database.

The concept of digital money that people send to and from online is not that complex; it is like transferring money from one online bank account to another is doing. Cryptocurrencies use blockchain technology, a procedure of sending data on the internet, to do this. It’s a bit different from normal currencies like dollars and pounds. Cryptocurrency is “decentralized”, means it is not regulated by a financial authority such as a government or central bank.

This gives some advantages: cryptocurrency is global, meaning it keeps the same value in every country. This feature makes them much easier to transfer from person to another, across the globe, apart from the problem of exchange rates.

The big disadvantage of having digital currency such as bitcoin and the like is that they are volatile and there have been reports that people have had to bear a loss of money because of technical snarl-ups.

Three Biggest Cryptocurrencies to Invest in 2020

Bitcoin, the best-known and first major cryptocurrency to invest that launched in 2009 and still remains the market leader. Its market estimation, effectively its total worth, is a stumble $128bn, as of April 2020. Ethereum and Ripple come in second and third place, with market caps of $19.4bn and $8.2bn.

Since 2009, a wide range of challenger cryptocurrencies, dubbed altcoins, have arrived on the scene.

How Much Bitcoin Price Changed Overtime?

So how should we invest in cryptocurrency according to profit and loss terminology, if you did invest five years ago, you would be enjoying a 2,015% profit. If you had invested $400 nine years ago, that was the time to buy as you’re a bitcoin multi-millionaire! Your $400 is now valued an incredible $39,457,667.

If you wonder what market forces these currency prices up and down so wildly, you are not alone. The value of this digital currency is linked to supply and demand plus the number of competitors. Often it is difficult to determine the factors, influence this erratic performance. This makes cryptocurrency riskier to invest in! 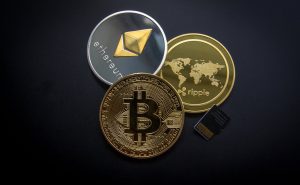 Is Investing in Cryptocurrencies Risky?

If you want to invest in cryptocurrency, ponder first whether you would buy a home with all facilities in South Dakota. The city in the United States has over 75,000 inhabitants and this city has places with the most unpredictable weather on earth, where snow blizzards and thunderstorms occur without any warning. The weather of Rapid City is an example to describe the behavior of Cryptocurrencies.

If you have a mind to invest in cryptocurrency then make a mind to lose some or all of your money as well. Or if you are not kind of risky then you can make some conventional investment, simply make a safe way of or find some other ways to make profit. Crypto is not a sort of conventional investing.

A less risky way of investing in cryptocurrency can be the “Stablecoins”. According to Gavin Brown, associate professor in financial technology at the University of Liverpool.

“Stablecoins continue to be a potential solution to the fears of volatility and credibility for cryptocurrency. In the contrary, Stablecoins have actual assets behind them, like tangible currencies,” he says.

DAI and TUSD are two of Stablecoins which are backed with the US dollar and one coin is worth $1. DAI is organized on the Maker (MKR) platform and other crypto platforms can also be safer to invest in than the regular currency. As he says, “Risk is therefore low but gains are very low or nil too.”

According to Brown, to make long-term investments with cryptocurrencies, it could also be less risky. Suppose, Facebook shares, which will launch its ‘Libra’ currency soon, JPMorgan, which has the digital JPM coin which is equal in value to the US dollar, and the Wells Fargo, which is creating a US dollar-linked stable coin.

As with any investment, do your due effort and don’t fix your all hopes on a single company or one digital currency, instead of spreading your savings around so you spread the risk.

The two of the world’s largest bitcoin trading platforms are Coinbase and Binance. New users are touted as an easy and fast way to purchase various cryptocurrencies. Gemini, founded by the Winklevoss brothers (of Facebook fame), is a digital exchange that allows customers to exchange the cryptocurrencies and is organized by the New York State Department of Financial Services (NYDFS).

If you want to buy bitcoin and other cryptos for selling purposes, there’ll be different fees, like transaction fees, deposit fees, withdrawal fees, trading fees, and escrow fees which are the few percent of the total transaction amount.

Many companies are about to launch bitcoin exchange-traded funds (ETFs), though are facing some sort of difficulties with regulatory agencies so far. This type of fund regulates the price of Bitcoin. The general purpose of it would be to accommodate the investing procedure into cryptocurrency and make it more feasible. It will still be volatile, but it can be easier to sell your investment in cryptocurrency and get your money back.

For inspiration, read about Lewis, who learned about cryptocurrency and made £8,500 in less than a year. Now after having a look at this article, you analyze yourself that whether should we invest in cryptocurrency or not?

Analyzing The Pros and Cons Of React JS In Detail

What is RPG Poise of Letoile: KEMCO & Its Alternatives

Why Digital Transformation Is The Top Priority For Your HR In 2021?